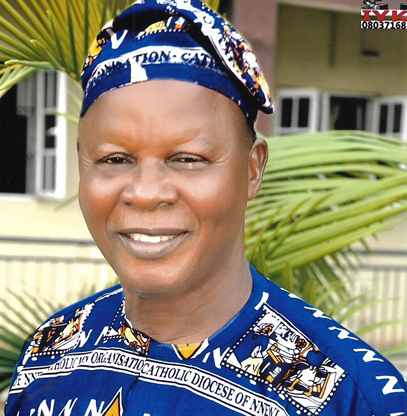 Ohalebo Simeon is from Umudara village of Ihiala in Ihiala Local Government Area of Anambra State.
He is the second son of the reputable and prestigious family of late Mr. & Mrs. Nwatoluba Ohalebo of the above named village, about eighty years ago.

Education: He had his primary education in his village, and secondary education at the popular Abbot Boys Secondary School, Ihiala
He studied Accountancy at the University of Nigeria, Nsukka, Enugu Campus and had his B.Sc. in Accountancy in 1990.
Marital Life: Mr. Ohalebo is married to Mrs. Rita Ohalebo, currently the Elected C.W.O. Deanery President of Ihiala Region. They are blessed with a daughter (Barrister) and four disciplined boys.

Working Experience: He taught accountancy, mathematics and economics for some years in different secondary schools before he joined the community bank as the Accountant/Manager. Later, he worked with so many private companies both as a manager and an accountant.
Currently, he is the Financial Administrator (F.A.) of Our Lady of Lourdes Hospital Complex, Ihiala (2014 to date).

Religious Life: Ohalebo Nnamdi Simeon is a devout Catholic. As a member of the C.M.O., He has been the chairman of St. Joseph’s Zone, Umudara Ihiala from (2014 to date).

Sports: He is a good footballer, a dribbler, he was the football captain of Abbot Boy’s Secondary School during his own time.

© 2022 All rights reserved
Powered by Boldwallet™